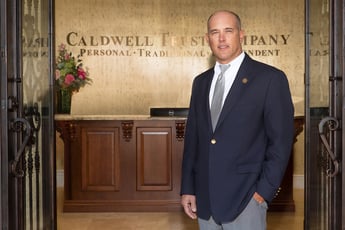 R. G. "Kelly" Caldwell Jr., Caldwell Trust Company CEO and president, began his professional career in 1988 when he returned to the Venice area after finishing college. A high-honors engineering graduate from Georgia Institute of Technology, Kelly planned to attend law school but wanted to learn more about his father's business, Caldwell & Company. Roland had established the registered advisory firm in the 1970s to provide investment guidance for the trust industry; by the 1980s, he was also publishing a respected investment newsletter and served as a trust consultant for a significant Venice bank. Young Kelly joined Caldwell & Company and never looked back.

In late 1992, Roland, Kelly, and a few hand-picked colleagues decided to form a new company with a primary focus on family trusts and a commitment to remain independent. They worked through most of 1993 on their application, making Caldwell one of the few independent trust companies in Florida. Caldwell Trust Company received its charter on November 1, 1993, signed its first client on November 2, and has continued to grow. "We still retain many of our early clients," Kelly says.

Roland's intimate knowledge of the trust industry and Kelly's engineering talent—coupled with their solid entrepreneurial spirits and keen intuitions—resulted in the creation of unique proprietary software, providing a substantial competitive edge that persists to this day. Their personal emphasis on philanthropy and deep concern for individuals add to the mix, making Caldwell a juggernaut in the industry.

When Roland retired in 2007, Kelly succeeded him as CEO of Caldwell Trust Company and its parent company, Trust Companies of America. Since then, total assets under management, total annual income, and stockholder equity have increased by more than 85%. All departments have expanded while the Information Technology (IT) function has seen the most extensive developments and investments as technology changes and security measures are monitored continuously.

The company focuses on people, both in hiring staff and addressing client concerns—the functions Kelly views as the most rewarding parts of his job. "Taking care of families is a primary mission here," he says. "We get to know each family and its goals, take care of their special needs, and ensure that their wishes for their families are fulfilled. It's also exciting working with our highly skilled team members."

Kelly is passionate about donating his time to the Venice community where he grew up. Among his pro bono causes is the Argus Foundation, where he was a two-term president and remains a board member. In addition, Kelly serves on the Florida Bankers Association's Trust Executive Committee boards, the Sarasota Sheriff's Office Charitable Foundation, and Suncoast Charities for Children. He is a proud alumnus of the Leadership Florida Class of XXVIII.

Kelly is a licensed pilot and often travels with his wife Melissa and their three boys, Brooks, Zach, and Chase. They also enjoy boating, diving, fishing, tennis, and more.

Caldwell Trust Company has impressive, state-of-the-art offices in its custom-built Venice headquarters and lovingly restored Sarasota home. The business currently has over 1.5 billion dollars in assets under management. It also serves as a trust manager and trustee for families, allocating client assets into stocks, bonds, and other investments. A third focus is its retirement plan services for employers that provide retirement plans for their employees.

"We proudly display my father's mission statement, 'What We Believe' at the entrance of our headquarters. I remember when he wrote it. It inspires me today as if I were reading it for the first time. Briefly, it says we take care of families and we do it honestly. It's the foundation of which this company stands. It's who we are."