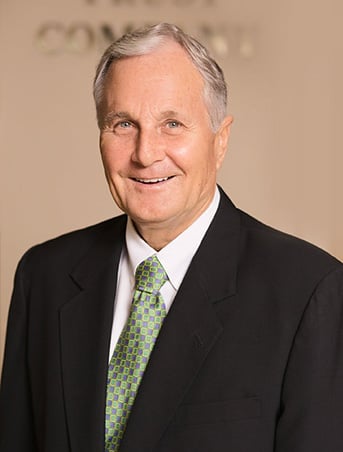 Retired banker Thomas Stuhley is the newest member of Caldwell Trust Company’s board of directors according to  R. G. “Kelly” Caldwell Jr., CEO and president. Caldwell praised Stuhley for his deep knowledge of financial and trust matters.

After earning a bachelor's degree in economics and speech from the University of Arizona, the Southern California native began a career in banking. Stuhley served as a trust officer at a Midwestern bank at the beginning of his career and was also a banking officer and director of several northern Illinois banks. In 1988 he purchased a small community bank in southern Wisconsin and subsequently grew it into the successful chain of Mid America Banks before retiring as CEO/chairman/owner in 2007.

During his years in the Midwest Stuhley was actively involved in his community, serving on the boards of several organizations and colleges. He is an emeritus director of Wisconsin's Aurora Health Care Systems, South Region, WI, and a trustee of Aurora University-George Williams College in Illinois and Wisconsin.

Stuhley purchased a vacation home on Casey Key in 1983, became a full-time resident in 2007 and has continued his practice of community involvement. He joined the board of Tidewell Hospice and completed a two-year term as board chair in September. He also serves on several Tidewell committees and is a director of Approved Home Health, a division of Tidewell Home Health, LLC. In addition he is a director of the Asolo Repertory Theatre Foundation and former director of the Casey Key Homeowners Association.

Caldwell Trust Company is an independent trust company with offices in Venice and Sarasota, Florida. Established in 1993, the firm currently manages over $800 million in assets for clients throughout the United States. The company offers a full range of fiduciary services to individuals including services as trustee, custodian, investment adviser, financial manager and personal representative. Additionally, Caldwell manages 401(k) and 403(b) qualified retirement plans for employers. To learn more about Caldwell Trust Company, call 1.800.338.9476 (toll-free), 941.202.5734 (Venice) or 941.877.5148 (Sarasota); email info@ctrust.com; or visit www.ctrust.com.