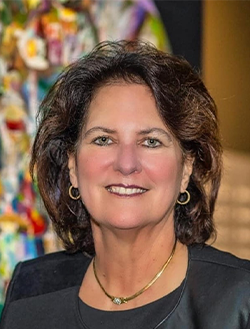 Rita Lowman, a banking powerhouse in the Tampa Bay area for over four decades, began her banking career 45 years ago as a state administration executive for NationsBank/Bank of America. She has blazed trails ever since--especially for women--up to her most recent position as president of Pilot Bank. Having managed over 20 acquisitions during her career, including the Nations Bank-Barnett Bank merger in 1997, she brings valuable experience with mergers and acquisitions, branding, and community involvement.

Lowman has been honored multiple times with various awards that cross boundaries between business and volunteer sectors. In 2017 she was elected as only the third woman in the 130-year history of the Florida Bankers Association to serve as its Chair. As a member of the FBA's executive board of directors, she contributed her skills to its government relations council, where she served as Chair. She provided similar services as the past Chair of the American Bankers Association's executive board of directors and its government relations council.

In addition to serving as a board member for Caldwell Trust Company, she serves as a board member for the Southeastern U.S. American Cancer Society and Tampa Bay Bowl Association. She previously served on the executive boards of directors of the Tampa Bay Chamber of Commerce and the St. Petersburg Chamber of Commerce.
Lowman's community service has seen her named as the 2020-2022 chair of the Tampa Bay Bowl and serving on its board of directors from 2013 through the present day.

In 2022 she was honored as Gracepoint's Guy King Mental Health Champion. She was also the recipient of the 2021 Dottie Berger MacKinnon Woman of Influence Award and the 2019 Outstanding Leader of the Year as president of Pilot Bank, both presented by the Tampa Bay Chamber of Commerce. The Girl Scouts of America honored her in 2019 with its Women of Distinction award. Previously, in 2018 she was named Tampa Bay Business Journal's Business Woman of the Year. In 2018 and 2019, the Tampa Bay Business Journal named Lowman to its prestigious list of Power 100. In addition, Richter Publishing selected Lowman's book, From the Farm to the Board Room, among the top Business Books of 2017.

Rita and her husband Gary reside in St Petersburg and can often be found at their cattle and timber farm HooperWill Farm in Waverly Hall, Georgia, named after their two sons.